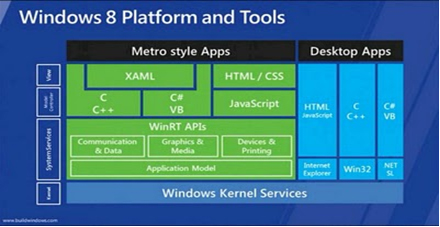 How Good Is Windows 8 App Development for IOS or Android App Developers?

The mobile market revolution has left no stones unturned;

every day a new app is developed with great features to enhance the user experience of millions of mobile users across the globe. Android and iOS have almost conquered majority of the market share and value of OS shipping. Windows, famed software of Microsoft, is now set to break the shackles with the introduction of Windows 8 and its apps to the millions out there in the space.
Reports claim that Windows 8 app has impressed a lot of Tablet, Smartphone users across the world. With the demand for these apps getting increased each and every day, the need for developing such apps is surmounting as well. With said that, I look forward to discuss a few amazing factors on how developers, especially iOS and Android app developers, feel when it comes to designing Windows 8 apps for global audiences.

The intuitive look and feel of Windows 8 apps with tile-based interface has garnered the attention of global audiences rapidly and it is one of the reasons why most mobile users are after this popular app. In an interview, a Vice President of Microsoft quoted that in the first 3 months, Windows 8 apps had topped the charts and had been downloaded infinite times. Also, he added that with an amazing reception worldwide, it is never a distant dream to achieve their lofty goals. However, to meet the growing demands in the near feature, Windows 8 app development may require the help of some top-notch developers across the world. Well, obviously it’ll be beneficial for Microsoft, but how worthy it’ll be for any iOS or Android developer getting his hands into this fascinating development field! It is a million dollar question, but of course with some absolute answers.

App development across any platforms, be it iOS, Android, or Windows 8, it requires some adept skills and expertise. Fundamental acquisitions required for Windows 8 app development include: SDK, C++, and C #. If you hold a strong expertise over these 3 interesting app developing tools, then it won’t too long to develop a fascinating Windows 8 app with lucrative features. It’s walk in the park for developers from iOS and Android nativity.

If easy to develop, how good is this app development for developers?

As a developer, if given a chance, I’d obviously opt for Android of iOS app development compared to Windows 8, as they both have the wide range of audiences, global reception, majority market share, solid growth, etc. However, I won’t deny raising a Windows 8 app as it isn’t going to buy my time for a long time!