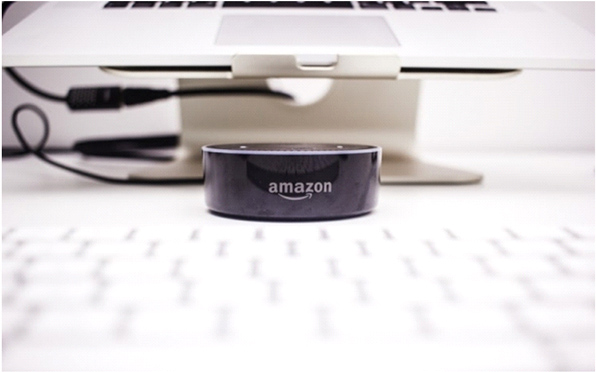 If you watched Dwayne Johnson’s Siri ad and Alec Baldwin’s Alexa ad, you can tell that the race to a voice controlled future is on.

Leading IoT research firm Park’s Associates observed that 46% of US millenials use voice recognition software and that over 70% of these users are satisfied with the voice-interaction on their smartphones. Clearly, voice is the future of man-machine relationships and app developers should definitely hop onboard.

For decades now, humans have tried to adapt to the ways of a computer, by learning arcane commands and bot-friendly language. Things are changing now as we are making our machines learn our language, understand out accent and execute commands in the language we use every day. Voice interaction is simply faster, better and way more natural, so without a doubt, voice-controlled apps are the future of app development.
However, app developers must comprehend the fact that voice interaction is not something you can incorporate into your apps as an add-on feature, or an afterthought. Voice control must be designed keeping some very unique factors in mind – factors that will determine how effective and user friendly your voice interaction app is.
So if you are planning to develop an app with voice interaction, here are the steps designers can take when designing – or redesigning – and app for voice:

Design for the Spoken Word, Not Keywords

Keywords have dominated our time on the internet for far too long now. Search engines that respond well to inputs like ‘ATM near me’ or ‘Order Pizza Online Florida’ almost forced humans to start thinking in keyword’ese. However, when interacting with their phone via voice, users are going to use phrases like ‘Siri, where’s the nearest ATM’ or ‘Alexa, call me a cab’ or ‘Siri, order me a pizza’. They are going to ‘talk’ to their devices and not give arcane commands like a NASA robot. It is therefore imperative that you design your app to respond to such voice commands in a more natural, human-like way.

So keep it conversational. Design for a query like “where’s the nearest ATM” instead of “Find ATM Near Me”.
Because the conversation will be heard and not read, a good practice is to read it out loud to see if it sounds like a natural spoken conversation, and to check that it conveys the tone of voice you’ve intended

Talking of checking for tone, it is important to establish the personality of your app. Is your app an upbeat companion or a disciplined personal assistant? The kind of messaging, language and voice your app uses to respond to users must be consistent and suitable to your business offering. So it is important to define your app’s personality. This will determine the kind of language, tone, voice and diction your app uses to talk to the user.

So for example, if you are designing a quiz game app, the conversation could be light hearted and fun, with words like ‘Good Job, that is correct’ and ‘Oops, that’s wrong, you lose one point’. If yours is a more formal, business like app instead, like a tax calculator or an insurance plan comparison app, and you wish to remain strictly businesslike, app responses would be more in the line of – ‘Please provide your name’ and ‘Thank you very much’.

While it is important to establish a distinct personality, remember also, that the user will be interacting with the app multiple times a day. So, upbeat and delightful responses mustn’t give way to annoying, repetitive experiences, like that annoying friend who just won’t stop with the ‘power of positivity’ spiel. Tread cautiously.

Carefully Research And Analyze Use Cases

Just because Siri, Alexa, Cortana and Echo are so popular and every major business seems to be hopping onboard the voice bandwagon isn’t reason enough to go out and spend a ton of money on developing voice controls in your app. You need to very carefully analyze use cases and find out how exactly your audience will use voice control, if they will.

For instance, if you are a food delivery app, users will be happy to just say – ‘get me a cheeseburger’. If you are an ecommerce app however, users won’t just say ‘buy me a blue shirt’. The visual will continue to be the largely preferred medium for you then. Of course the use cases will evolve and with ample creativity, a lot will be done with voice eventually, but it would be a good idea to do adequate research to find out what your audience expects from voice.

Voice Is An Addition, Not A Replacement

When businesses abandoned websites and went ‘app only’, it was a bold move that somehow worked, though we still miss the websites sometimes. However, attempting the same feat with voice could be disastrous. Voice-only apps do not sound like a good idea today, tomorrow or for quite a few years. So remember to use voice interface as an added means of helping the users. Do not take away the visual support, for there will be times when voice just won’t be a good enough fit, like when the user is in a noisy place, or in an extremely quiet place where talking to your phone is rude.

Also, even as the users are effectively using voice control, never take away the visual feedback. System progress status, how far has the application loaded, is it still searching for answers or has the application stopped, all these are hard to communicate exclusively through voice.

Just Have Fun With It

At the end of the day, adding voice interaction is in many ways, largely for delighting users. So just have fun with it. Make your app talkative, though not too much. Provide interesting, well delivered responses instead of monotones in a business voice. Use interesting, soothing, funky or quirky voices depending upon the personality of your app. Imagine and reimagine the scope of man-machine interaction through voice.

Humans learnt to talk first and write much later. With computers thou, written commands took precedence for decades. It’s time for voice to reclaim its throne and become the primary medium again. So if you are just getting started with voice-based app development, the above ideas will help you make the best of this fantastic technology, and help you truly delight your users.